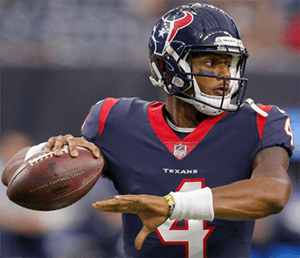 We’ll provide some insights and review some of our DFS value players for week 4.

Salary ranks are based on the main-slate Sunday only (13 games). This is currently tentative due to Tennessee’s COVID-19 outbreak.

The Seahawks’ defense ranks 25th in adjusted sack rate vs. a Dolphins’ offense which ranks 11th, which should give Fitzpatrick sufficient pocket-time to do…something. With shootout potential implied on Fitzpatrick’s side, there is also potential for a Fitzmagic week at a discount cost.

The Vikings’ defense ranks 10th against QBs and 29th against WRs in fantasy points allowed.

Watson had a tough start to the season, having to face the defenses of Pittsburgh, Baltimore, and Kansas City. He’ll get his first soft matchup of the season against a Vikings’ defense that lacks the pressure Watson had to endure while taking 13 sacks and 34 QB hits through the first three weeks.

Recency bias should help keep his popularity down this week as well.

As of the time of this writing, this game is still scheduled to play. Be that the case, the Vikings are currently restricted from their facility and could miss practice and preparation time due to possible exposure from Tennessee’s positive COVID tests last week. This scenario would inherently give the Texans the preparation advantage.

The betting line with the Giants has the game total at 48 points with the Rams as -12.5 point home favorites. The Rams’ implied team total is currently at 30.25 points and the Giants are currently at 17.75 points. The spread on the Rams is the 2nd widest on the board.

The Giants rank 23rd vs. RBs in fantasy points allowed. The Rams’ offense ranks 3rd in adjusted line yards vs. the Giants’ defense which ranks 7th.

The Rams lead the league in rush attempts (111) and rank 3rd (tied) in rush yards per game (170.3). Henderson has already been given the nod to start in this ideal setup this week.

The Raiders rank last vs. RBs in fantasy points allowed. The Bills’ O-line ranks 21st in adjusted line yards vs. the Raiders’ defense which ranks last.

The positive game-script and the nuts matchup sets up Singletary nicely this week. His biggest adversary is teammate Josh Allen for the goal-line looks. This play is contingent that Zach Moss (toe) misses again this week.

The Bills’ defense ranks 26th vs. WRs in fantasy points allowed. The Bills’ defense is most vulnerable at the slot where they have been gashed by fellow slot WRs Cooper Kupp (9-107-1), Isaiah Ford (7-76-0), and Jamison Crowder (7-115-1) the past three weeks, with Renfrow up next.

The Raiders may also be without both perimeter WRs as Henry Ruggs (hamstring) and Bryan Edwards (ankle) may miss time. Renfrow may get additional volume opportunities, with a good matchup, where Derek Carr likes to throw.

UPDATE:
Edwards (ankle) has been ruled out and Ruggs (hamstring) is doubtful.

Fuller is still healthy, and is in a prime spot to blow up, before he blows something.

Travis Kelce put up a 6-87-0 line on 7 targets at Baltimore last week.

Thomas’ 24 targets ranks him 3rd (tied with Zach Ertz) for TEs. Likely having to play catch-up early, Thomas’ ample opportunities should again present itself. He’s got to hit sooner or later.

Ebron posted a 5-52-1 receiving line on 7 targets with 60 snaps (75%) against the Texans last week. Ebron’s receiving line led or tied for the lead on the team.

Kyle Rudolph logged a 2-11-1 receiving line on 3 targets against the Titans last week.

Because of Tennessee’s COVID outbreak, they are currently banned from their facility until Saturday. Zoom preparation will likely fill the Titans’ week. Advantage to Pittsburgh, with a reasonably priced Ebron in play.

UPDATE:
The Steelers @ Titans game has been postponed.