The top fantasy football leagues share a similar format and set of rules. You can either compete head to head against one other opponent or against a large tournament field consisting of thousands of entries, or any size contest in between.

DFS leagues are typically grouped into two categories – Tournaments and Cash Games. Tournaments are leagues or contests that are made up of many participants, with a large prize (or the entire prize) going to the winner. Typically tournaments pay more than just the winner, with increasingly smaller prizes being awarded to the top 10% to 20% of the entrants (depending on the structure of that particular tournament). Tournaments vary in the number of participants, pay out structures, entry fees, etc.

Cash Games refer to DFS contests that double your money, so these would be Head-to-Head leagues (against one other person), 50/50 leagues (top half of the entrants double their money), and similar contests.

The top sites also allow you to create private leagues so you can limit the participants to just people that you privately invite. These can be either Tournaments or Cash Games.

The salary cap format is the most popular form of DFS fantasy football. For each league or contest, the rules work like this – the contestant is given a certain salary cap which the contestant then spends on players to draft his team.

FanDuel and DraftKings teams consist of 9 players, but the make up of the 9 positions differ depending on the site. Both FanDuel and DraftKings teams are made up of a QB, three wide receivers, two running backs, one tight end, and a team defense/special teams slot. These two sites differ in that FanDuel’s 9th player must be a kicker, whereas at DraftKings the 9th player is a flex position and can be either another running back, wide receiver, or tight end.

Unlike the typical league-long fantasy football rules where once a player is selected to a team, he is no longer available from the player pool, the daily/weekly formats do not have that restriction. In other words, multiple teams in a single tournament or contest can have Peyton Manning on their team. You just need to draft the best team you can within the limits of the salary cap. Yes, it’s possible that another person can have your exact same team in the same contest, in which case you would split the proceeds if you won. For example, if you both tied for 3rd place, and 3rd place paid $30 and 4th place paid $20, you would both split $50 and receive $25 each.

FanDuel is one of the largest daily fantasy sports site, but if you prefer leagues that do not utilize the kicker position, then you should consider playing at the other top DFS site DraftKings, which utilizes a flex position instead of kicker.

Let’s say only 800 people enter this particular tournament, then we’ll have an overlay of $2,000. This deficit of $2,000 is guaranteed by the DFS site and is paid for by the DFS site. Any tournament that has an overlay (extra prize pool money beyond the sum of the entry fees) provides value to the player, and the bigger the overlay, the better the value! It doesn’t hurt to have an account at each of the top DFS sites so that you can keep an eye on the latest promotions and best overlay tournaments.

Find and Research the Players 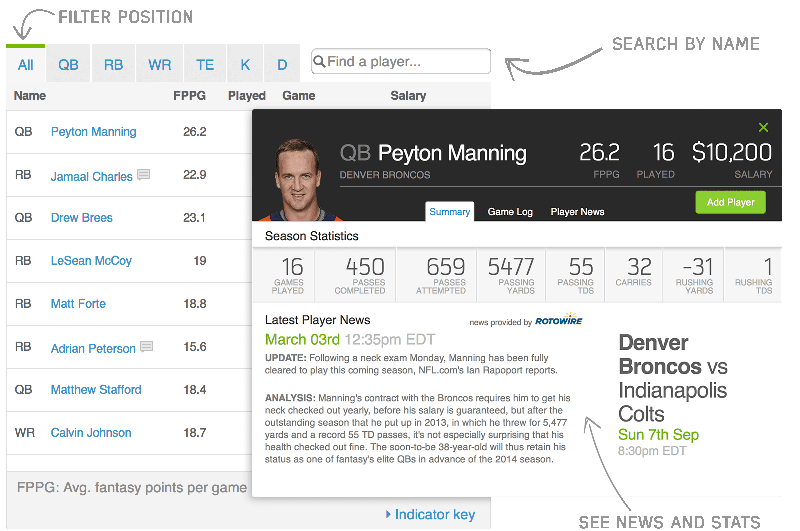 Click on the player of your choice, and the player will get added to your lineup, and your salary cap will automatically get reduced by the appropriate amount. You can go back and edit and change your roster as often as you like prior to the official start of the contest.

Spend Your Salary Cap on the Players

Now the goal of the contest is to have your team earn the most points. You of course earn points for scoring touchdowns, but you also earn points for total rushing and passing yards as well as other factors.

The scoring systems are slightly different between the two leagues – DraftKings and FanDuel, but they are all very similar. You can compare the differences below for offensive scoring.

The most important difference to note is that DraftKings awards 1 pt for every completion whereas FanDuel awards 1/2 a point per reception. Also, DraftKings awards bonuses to players that have 100+ rushing yards, 100+ receiving yards, or 300+ passing yards.

Both sites, FanDuel and DraftKings, provide scoring from your defense AND special teams. So this means you can get points from punt returns returned for a touchdown, etc.

All leagues follow the same defensive scoring system shown below. 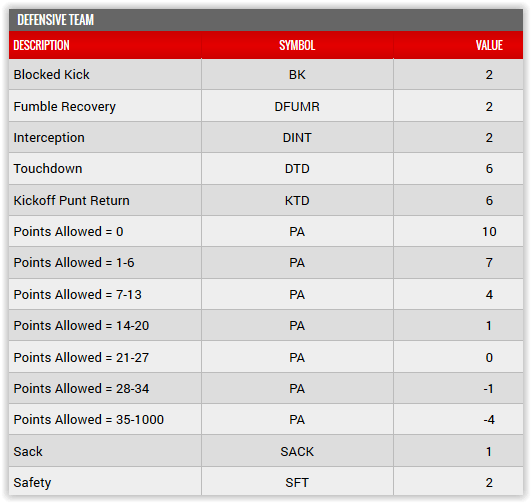 Leagues from both sites award you 10 points for a shut out and will deduct 4 points if your opponents scores 35 points or more, so be sure to give some thought to your defense!

Get Your Welcome Bonus!

Ok, that’s about it – pretty simple, right? You can play for free or satellite into larger tournaments for as little as $.25! If you decide to play at one of the top DFS sites, be sure to check out our new player promo for FanDuel and DraftKings new player promo to qualify for the maximum welcome bonus as well as exclusive promotions.

If you’d like to learn about traditional season long fantasy leagues, read our ultimate guide on how to play fantasy football traditional leagues!