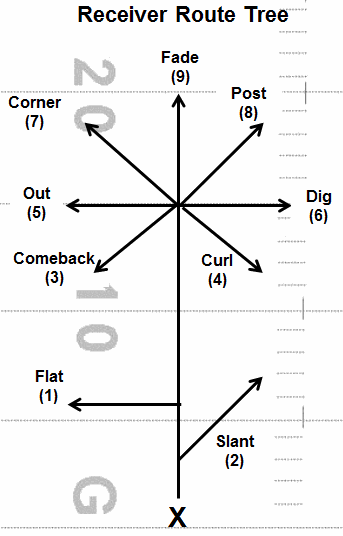 (1) Flat: A quick, three-step route which breaks to the outside into the flat. This route is designed for short gains and getting out of bounds to stop the clock.

(2) Slant: This route starts off going vertical with a one-step or three-step break to the inside of the defender.

(3) Comeback: This route usually breaks anywhere from 12 to 15 yards from scrimmage, with a sharp cut back and out. The receiver needs to have enough separation from the defender at the break with ideally an accurate, strong-armed QB throwing away from the defender. Otherwise, this route is a pick-six waiting to happen.

(4) Curl: This route is the inverse of the curl, instead, breaking at the same distance, but to the inside. The curl is common with possession-type receivers.

(5) Out: Also referred to as the deep-out, this route requires the receiver to have adequate space on the outside to complete this catch. Think toe-drag-swag catches.

(6) Dig: Also referred to as the square-in, this route is the inverse of the deep-out.

(7) Corner: Combined with the flat route combination from another receiver to keep the cornerback from dropping deep, the corner route is often used to target the gap between the cornerback and safety in cover 2.

(8) Post: A deep, in-breaking route that is usually schemed for fast receivers.

(9) Fade: Also referred to as a fly, go, stretch, or take-the-top-off route, is the staple route for the speed receivers. Think Tyreek Hill types.

These are the basic route tree concepts where other advanced, double-move type routes are built from.