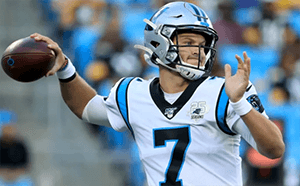 We’ll provide some insights and review some of our DFS value players for week 11.

Allen stood out as a solid floor, cheap play with a great home matchup.

Green Bay RBs combined for a 26-156-3 (6.0 yds/att) rushing line against the Panthers last week. The Panthers’ defense ranks 29th against RBs in fantasy points allowed and last over the past four weeks.

With Devonta Freeman (foot) set to miss the next two weeks, and Ito Smith already placed on IR, Hill gets a full bellcow role with a great matchup for cheap.

Tampa Bay RBs combined for a 23-78-2 rushing line and 12-105-0 on 13 targets against the Cardinals last week. The Cardinals’ defense ranks 21st against RBs in fantasy points allowed and 29th over the past four weeks. The Cardinals’ D-line ranks 17th in adjusted line yards vs. the 49ers’ O-line which ranks 9th.

With Matt Breida (ankle) expected to miss this week, his 34.1% snap-share should mostly be absorbed by Coleman, although Raheem Mostert should see a bump up in snaps as well. With TE George Kittle (knee) and WR1 Emmanuel Sanders (ribs) currently game-time decisions, emphasis on the run, even more so, should be in play for San Francisco.

TE Austin Hooper (MCL) will miss this week, which vacates his 81.8% snap-share and 17.7% target-share. As the slot WR, Gage could pick up for some of Hooper’s targets between the hash marks. There’s an opportunity window here for a near minimum priced play in a decent matchup.

With TE George Kittle and WR Manny Sanders looking iffy this week, Deebo becomes the 49ers de facto WR1 for a cheap price. Kittle and Sanders combine for 13.1 targets/gm. Deebo’s 5.4 targets/gm should get a big bump in their absences.

The betting line with the Eagles (5-4) has the game total at 44.5 points with the Patriots (8-1) as -3.5 point road favorites. The Patriots’ implied team total is currently at 24 points and the Eagles are currently at 20.5 points. Both teams are coming off their byes.

Sanu has quickly been inducted into Brady’s circle of trust since being traded from Atlanta. In week 9 comparison, Julian Edelman posted a 10-89-0 receiving line on 11 targets with 67 snaps (100%), yet he’s the WR4/WR8 in salary cost on DK/FD, respectively.

Minnesota TEs combined for a 9-48-2 receiving line on 12 targets at Dallas last week. The Cowboys’ defense ranks 30th against TEs in fantasy points allowed and 31st over the past four weeks.

The status of QB Matthew Stafford is currently unknown, but either way, Hockenson has the best positional matchup against a Dallas defense that is weak against TEs. As Dallas ranks 2nd vs. WRs in fantasy points allowed, Hockenson could benefit against a TE-funnel defense, in an implied negative-script game.