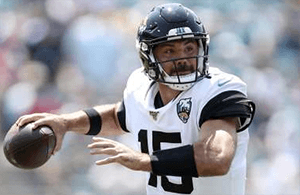 We’ll provide some insights and review some of our DFS value players for week 6.

Minshew, currently fantasy’s QB11, is a cheap, solid play in a pass-funnel matchup, at home. A lot of boxes get checked with him.

The betting line with the Jets (0-4) has the game total at 43 points with the Cowboys (3-2) as -7 point road favorites. The Cowboys’ implied team total is currently at 25 points and the Jets are currently at 18 points.

The Jets’ defense ranks 14th vs. QBs and 22nd vs. WRs in fantasy points allowed. The Jets rank 6th vs. TEs, however, they faced no TE competition until they gave up 18.8 fantasy points to Philly TEs last week. LT Tyron Smith (ankle) is expected to return this week, to coincide with the Jets ranking 29th in adjusted sack rate. The table is set for Dak and co. in a bounce-back spot after getting hammered by Green Bay last week.

It’s Toilet Bowl week. Regardless of how this game goes, Drake should mostly be script-proof, as he ranks 2nd on the team in catches and 3rd in targets. He’s a cheap play in that super rare opportunity where Miami players can be dusted-off for use. RB2 Mark Walton has surpassed Kalen Ballage and could cut into Drake’s snap %. Now on to the flip-side…

Chargers RBs combined for a 28-80-2 rushing line and 8-97-2 on 8 targets at Miami in week 4. The Dolphins’ defense ranks 31st against RBs in fantasy points allowed and in DVOA rush defense.

Jay Gruden was scapegoat fired two days ago, with O-line coach Bill Callahan now the interim HC. So in a nutshell, Callahan feels Washington hasn’t been running the ball enough and aims to “fix” that. Callahan’s neanderthal philosophy suits Peterson perfectly. If there’s one time this entire season where Peterson can be used, it is Toilet Bowl week.

Peterson leads the team in red zone opportunities with 8, and if he gets there, those should be his even more so. Peterson’s usage is dependent on rushing in neutral-script or with a lead. Washington will head into a game with an implied positive-script this one time. Party like it’s 1999!

Washington ranks 29th vs. WRs in fantasy points allowed and 28th in DVOA pass defense. Williams leads the team in all receiver categories, and his red zone targets (5) are more than the rest of the team combined. Williams is a cheap play in a rare occasion where it’s doable.

The betting line with the Titans (2-3) has the game total at 39 points (lowest on the board) with the Broncos (1-4) as -2.5 point home favorites. The Broncos’ implied team total is currently at 20.75 points and the Titans are currently at 18.25 points.

The Titans’ defense ranks 11th vs. WRs in fantasy points allowed and 14th in DVOA pass defense. Sutton shouldn’t face any shadow coverage like he did with Casey Hayward last week. Sutton, currently the WR11, hasn’t seen less than 7 targets all year, and has been held to single digit points once this year vs. Chicago in week 2. The Titans haven’t allowed a ceiling game yet this season, but this isn’t a scary matchup, especially for Sutton’s volume and price.

San Francisco’s defense ranks 3rd against TEs in fantasy points allowed. This ranking is misleading however, as the Niners have yet to be challenged at the position, with their “toughest” TE matchup being week 2 vs. Tyler Eifert who managed 9.9 points.

Everett’s snaps have been consistent and may trend higher if WR Brandin Cooks (concussion) doesn’t get cleared. Over the past two games, Everett averaged 9.5 targets/gm. RB Todd Gurley (quad) also popped on the injury report today. Everett’s involvement in the offense should further increase throughout the season.
Update:
RB Todd Gurley (quad) is listed as doubtful.