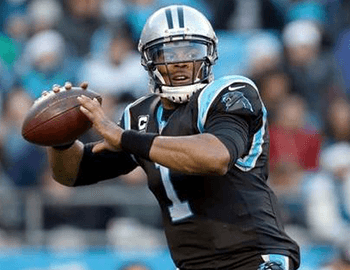 We’ll provide some insights and review some of our DFS value players for week 12.

The Dolphins ranks 28th vs. QBs in fantasy points allowed, 21st in pass defense DVOA, and 19th in dropback EPA.

The Panthers O-line ranks 24th in adjusted sack rate vs. a Dolphins’ defense which ranks 19th. The Dolphins have given up the 5th most rush yards (30.0/gm.) to QBs over the past four games.

Newton was the 4th best QB value play last week, and was also in the Week 11 Milly Maker winning lineup. He’s back as an undervalued DK play with another solid matchup this week.

The Eagles own the highest rushing play % on the season (49.6%) and over their last three games (64.7%). RB Jordan Howard (knee) will likely miss this week.

Sanders should see a positive opportunity as favorites, with a great matchup.

Dillon will get a script-proof role, as the supposed #2 weapon in the offense. Dillon’s cost for his role makes him a solid value.

UPDATE:
RB Aaron Jones (knee) got in a limited practice on Friday, and is now questionable.

Godwin gets a good matchup on the slate’s highest implied game total. The Bucs are the 2nd pass-happiest team at 67% on the season, and 1st over the past three games at 70.2%. This trend should definitely continue against a pass funnel defense which is the 2nd best team vs. the run.

Dawson Knox logged a 6-80-0 line on 10 targets against the Colts last week.

The Colts’ defense ranks 27th vs. TEs in fantasy points, 20th in pass defense DVOA, and allowed the 5th most TE receptions (6.5/gm.) over the past four games.

When healthy, Gronk is always a viable option, and gets a positive matchup this week.