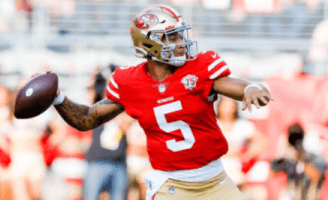 We’ll provide some insights and review some of our DFS value players for week 5.

The Cardinals rank 8th vs. QBs in fantasy points allowed.

The Cardinals O-line ranks 7th in adjusted sack rate vs. a 49ers’ defense which ranks 17th.

Assuming Lance gets the start for Jimmy Garoppolo (calf), he provides for a cheap, solid floor with upside play.

UPDATE:
Garoppolo has not practiced all week. Garoppolo has been ruled out on Friday. TE George Kittle (calf) has been placed on IR.

The Cowboys rank 30th vs. QBs in fantasy points allowed.

The Giants O-line ranks 13th in adjusted sack rate vs. a Cowboys’ defense which ranks 21st.

Jones is the overall QB6, ranks 3rd in QB rush yards, and 4th in QB rush TDs. This game’s projected up-paced tempo aids the scoring environment. He’ll get an implied passing scenario in a good matchup.

Despite losing a rushing TD to Ronald Jones (17% snaps) last week, Lenny has solidified himself as the Bucs’ RB1. Giovani Bernard (knee) missed last week, and his status is currently unknown. Without Bernard, Fournette would be a value with his role/usage as a big favorite with a great matchup.

UPDATE:
Bernard practiced Friday, and is expected to suit up. Bernard would assume passing-down situations if needed, but the Bucs could get up big early.

RB David Montgomery (knee) racked up a 23-106-2 rushing line last week, but exited and will miss multiple weeks. Montgomery accounted for 63% of the team rushing attempts (5th in the NFL), and logged a 72.6% snap rate (6th in the NFL). Williams will likely step into a 3-down role, as he is adept in the passing game.

The Cowboys rank 30th vs WRs in fantasy points allowed.

At this point, WRs Sterling Shepherd (hamstring) and Darius Slayton (hamstring) are both looking to miss again, leaving Toney in play as a cheap option, in an expected passing-script, with a solid matchup.

The Texans rank 11th vs. WRs in fantasy points allowed.

The Patriots should be able to choose their path to success here, but any route through the air will go through Meyers. Meyers leads the team in all receiving stats by far, except for TDs. He’s due to hit.

Saints’ TEs combined for a 3-23-1 line on 4 targets against the Gaints last week.

The Giants rank 29th vs. TEs in fantasy points allowed.

Schultz is the TE4 on the year, and has been on fire averaging 21.9 fantasy points over his past two games. He also gets the best positional matchup against the Giants this week.