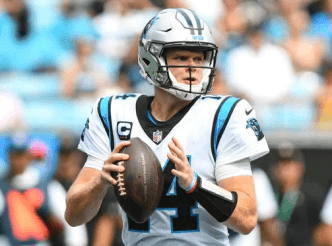 We’ll provide some insights and review some of our DFS value players for week 4.

Salary ranks are based on the main-slate Sunday only (13 games).

The Cowboys rank 29th vs. QBs in fantasy points allowed after facing Philly, the Chargers, and Tampa Bay.

The Panthers O-line ranks 14th in adjusted sack rate vs. a Cowboys’ defense which ranks 31st.

Darnold surprisingly is currently the QB10, ahead of Russ, Herbert, and Dak. He provides for cheaper salary relief with a passing-script, in a good matchup.

Ravens’ RBs combined for a 15-58-0 rushing line and 1 missed target at Detroit last week. Lamar Jackson added 7-58-0 on his own. The Bears’ O-line ranks 28th in adjusted line yards vs. the Lions’ defense which ranks 26th.

Montgomery should be the offensive focus this week, with a high touch volume, and an implied positive-script.

Bears’ HC Nagy killed it in his “Adam Gase” impersonation last week. The Bears ended up with 47 yards of total offense. He couldn’t possibly encore this again, right? If the reincarnation of Gase re-emerges this week against a winless Lions’ team, all Bears become unplayable.

UPDATE:
Mitchell logged a limited practice on Wednesday, and looks on track for a return. If this is the case, he would be the pivot to get at the Seahawks’ run defense.

The Cowboys rank 27th vs WRs in fantasy points allowed after facing Philly, the Chargers, and Tampa Bay.

With the losses of RB Christian McCaffrey (hamstring) and TE Dan Arnold (traded to Jacksonville), 27.5% of the team target share opens up. RB Chuba Hubbard will get some of this, but not at the McCaffrey level. Arnold’s departure may factor more towards Marshall as the slot WR. Facing a negative-script, unlike last week, Marshall offers a potential cheap volume option.

The Texans rank 24th vs. QBs and 9th vs. WRs in fantasy points allowed after facing Carolina, Cleveland, and Jacksonville.

The Bills rank 4th in pass attempts, 2nd in plays/gm, and 4th in seconds/play. They are a pass-happy bunch that plays fast, which provides for a great environment for all Bills’ receivers to eat.

Lions’ TEs combined for a 4-45-0 line on 5 targets against the Ravens last week.

WR K.J. Hamler (ACL) is now out for the season, along with his 10.8% target share. Fant is in a nice bounce-back spot.

Jordan Akins logged a 4-32-0 line on 5 targets against the Panthers last week.

The Panthers rank 6th vs. TEs in fantasy points allowed, however, they have not yet been tested at TE as they have previously faced weak TE teams Houston, New Orleans, and the Jets.

Schultz gets a price discount, as the Cowboys played Sunday night, after salaries were already released. There’s a lot of weapons on the Cowboys, but Schultz is in the mix.