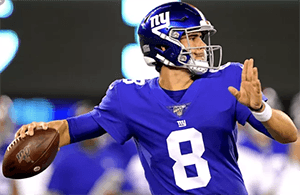 We’ll provide some insights and review some of our DFS value players for week 3.

Salary ranks are based on the main-slate Sunday only (13 games).

Fields posted a passing line of 6/13, 60, 0:1, and 10-31-0 on the ground in just over a half against the Bengals last week. Andy Dalton (knee) left the game late in the first half last week, and has been ruled out already this week.

The Browns rank 12th vs. QBs in fantasy points allowed after facing the extremes of the Chiefs and Texans.

The Bears O-line ranks 26th in adjusted sack rate vs. a Browns’ defense which ranks 25th.

Of note, Fields logged 7 (non-kneel down) rushes, in just over a half. Were this trend to continue, Fields could bring a huge floor at an underpriced salary.

The Falcons rank last vs. QBs in fantasy points allowed after facing Tampa Bay and Philadelphia.

Jones ranks 3rd in QB rushing yards (122) and tied for 1st in QB rushing TDs (2). Jones is currently the QB8 after facing tougher defenses, in Washington and Denver. Jones is poised for a potential ceiling game without the cost.

The Washington RBs combined for a 17-79-1 rushing line and 7-87-0 on 8 targets against the Giants last week. The Falcons’ O-line ranks 22nd in adjusted line yards vs. the Giants’ defense which ranks 20th.

The Giants’ defense ranks 26th vs. RBs in fantasy points allowed after facing Washington and Denver.

Cordarelle Patterson saw 33% of the offensive snaps last week, and an outlier amount of opportunities. Davis is still expected to lead this backfield regardless of game-script, and provides for a cheap option.

Cardinals’ WRs combined for a 17-277-3 line on 22 targets against the Vikings last week, with fellow slot Rondale Moore posting a 7-114-1 line on 8 targets specifically.

The Seahawks rank 16th vs. WRs in fantasy points allowed after facing Tennessee and Indy.

The Vikings are primarily running 11-personnel, which should have Osborn in play for dirt cheap.

The Browns rank 17th vs. WRs in fantasy points allowed after facing Houston and Kansas City.

With Fields now starting, Chicago skill players should all get a boost, and as 7 point dogs, Mooney should expect for a busy day.

The Bears rank 8th vs. TEs in fantasy points allowed, but this ranking is misleading as they only saw 2 targets for 2 catches and 4 yards from C.J. Uzomah last week, as the Bengals do not utilize TEs in their pass game.

WR Jarvis Landry (knee) has been placed on IR. Odell Beckham Jr. (ACL) is expected to make his debut this week, but could bring a limited impact if brought along slowly. Njoku makes for a sneaky play with the biggest ceiling potential of the Cleveland TEs, when the Browns aren’t implementing the ground and pound.