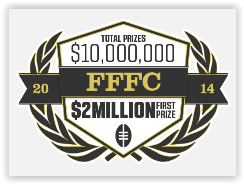 This was the $2 million winning lineup:

Non-contrarian thinking – The top 3 lineups all had Anderson, Bell, Beckham Jr., and Barth. These top 3 also all qualified for the FFFC with $2!

Breaking down the lineup:

Anderson was owned by 47% of the players. After news of Cam Newton’s car accident which kept him out of the game, Anderson became the cheapest starting QB in a perfect storm matchup against Tampa Bay. This was a great value play as Anderson was priced as a backup.

Bell was also owned by 47% of players. The top fantasy back with a great matchup against Atlanta delivered. The most expensive play was arguably the most sure fire start.

Beckham Jr. was owned by 61% of users with a great matchup against Washington. He was targeted 15 times by Eli and delivered with the highest score in the lineup. This year’s rookie receiver class is the best to date, and this guy is scary good.

Moncrief looked to be number plug play who returned a donut on zero targets, but it didn’t matter.

It was surprising to see Hill only owned by 1% of players. Hue Jackson publicly stated during the week, after salaries were set, that he was not going to run a committee. That meant it was Hill’s job who went on to paste the Browns for 152 yards from scrimmage, with an awesome 5.9 yards per carry average, and 2 touchdowns, even outscoring Le’Veon!

Read our review of FanDuel here or take a look at FanDuel player promos here!