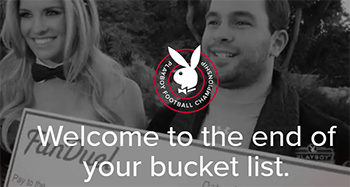 FanDuel has announced their Playboy Football Championship with a total cash prize pool of $600,000! The 1st place champion will receive $125,000! All 75 finalists will cash out!

The FanDuel live championship will be held on December 4, 2016 in Los Angeles, California. Each finalist will receive a VIP package ($4,200 value) including a two night trip for two, a $1,000 credit for round-trip airfare, and a chauffeured transfer from the airport to the upscale hotel.

The live championship party was scheduled to take place on the grounds of the Playboy Mansion, but the venue location has changed and this new location will be announced in the future. The Mansion is now under new ownership and — despite Playboy’s best efforts — the owners were unable to secure the necessary permissions to host commercial events.

Fantasy footballers, draft your lineups for your shot at the $600K prize pool and party like a rock star in Los Angeles!

Check out our review of FanDuel here or find out about the current FanDuel new player promos for the maximum benefits possible!